How Many People Own Bitcoin?

How Many People Own Bitcoin?

Bitcoin regained its composure as its price ascended to a record high on Saturday, 13 March, overcoming a psychological barrier at $60,000, a move that reaffirms the bullish nature of the crypto-asset and signals an ambitious path forward for digital currencies. The jump above $60,000 means that bitcoin has taken less than a month to break through another $10,000 landmark, after hitting $50,000 back in mid-February.

It has since dipped back below its all-time high, but recent trends suggest that this won’t be the case for long. The new milestone for the world’s most popular cryptocurrency comes after a period of relative inactivity for the asset, whose gains have been attributed to greater adoption by prominent institutional investors.

Goldman Sachs restarting its crypto desk; JPMorgan launching a crypto exposure product; NYDIG raising money from Morgan Stanley and others, are the latest signs of growing interest in bitcoin. These new institutional developments come off the back of Tesla’s announcement that it invested $1.5 billion in bitcoin in February, making the electric car manufacturer the second-largest publicly traded corporate holder of the digital currency behind MicroStrategy.

A rising number of firms are testing the crypto-waters, with enthusiasts believing that this new wave of interest is different, as big-name firms support the price and lend legitimacy to the project.

Can We Know How Many People Own Bitcoin?

It isn’t easy to measure just how many people own bitcoin. Since exploding into the mainstream, there have become many ways to purchase and own it. We know how many Bitcoin wallets exist, but this doesn’t paint an accurate picture as individuals can own multiple wallets.

How Do People Buy Bitcoin?

Buying bitcoin and other altcoins has become relatively simple in 2021. There are a few ways to go about it, the most common being buying these digital assets from a crytpocurrency exchange. We at Wisly recommend and use Binance, Coinbase Pro and HitBTC.

Another way to do the deed is through large broker investment apps such as Robinhood or Revolut. Although I would urge you to go with one of the exchanges mentioned above to buy Bitcoin rather than a broker app. Robinhood does have one substantial advantage going for it, and that’s zero fees crypto trading. For trading purposes, it’s hard to argue with zero fees.

The final way to purchase the precious and limited supply cryptocurrency is indirectly through investment vehicles such as Grayscale Trust, which just received an investment of $100M from an Israeli pension giant. Funds such as Grayscale trust offer investors the opportunity to gain exposure to the leading cryptocurrency without holding any of it themselves. In essence, it is investing in those who are investing in bitcoin. This may not completely shield you from cryptocurrency’s signature volatility, but it can give you some protection from loss.

How Many Bitcoin Wallets Are Out There?

There are 69 million blockchain wallet users worldwide. This figure has more than doubled from 34 million 3 years prior, representing exponential growth. However, we need to keep in mind that because multiple wallet ownership is possible and very much a reality, there’s no direct correlation between this increase and the new wave of crypto investors joining the market.

Who is Buying Bitcoin?

The bullish upswing in price has in part been fuelled by well-known Wall Street billionaires publicly backing bitcoin. Analysts say that this has given confidence to otherwise sceptical mainstream investors. This confidence is spreading like wildfire as many people are following suit by investing in bitcoin, as they believe it will be highly influential in the future and consider bank interest rates far too low to keep up with inflation.

The COVID-19 pandemic saw a high adoption rate of cryptocurrencies, but who has been fuelling this buying binge during the crisis?

Millennials, Gen X and high income, well-educated men were the driving force in crypto purchases this past year. Millennials aged 26 to 40 made up 57% of all cryptocurrency consumer buying in 2020, while Gen Xers aged 41 to 55 accounted for an additional 30%. 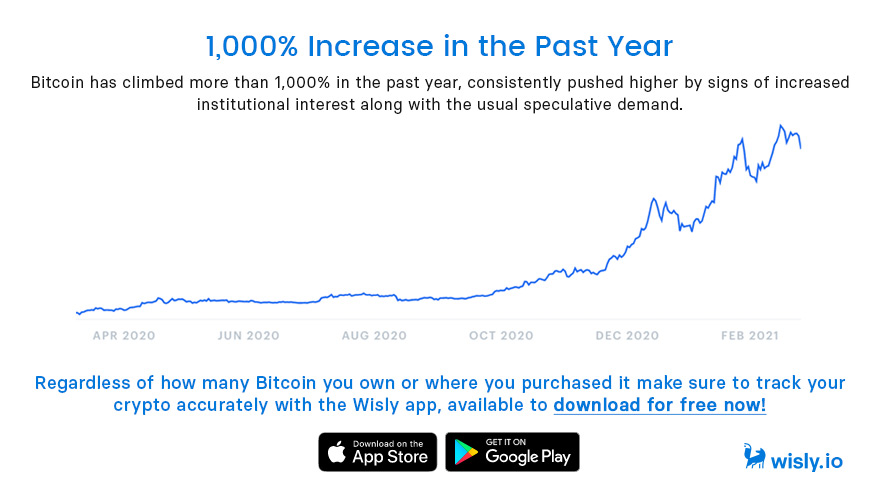 Bitcoin has climbed more than 1,000% in the past year, consistently pushed higher by signs of increased institutional interest along with the usual speculative demand. We wouldn’t be surprised to see more big-name corporates enter the fray to leverage a position in crypto-territory in the coming months. Regardless of how many Bitcoin you own or where you purchased it make sure track your crypto accurately with Wisly app, available to download for free now!